When the Sydenham Sportsmen's Association decided to become involved with an egg collection, the first attempt was an upwelling egg box built from plywood at the club property.  We collected the appropriate sized stones from Ainsley Wood. This box was located inside the wire enclosure just above the swimming pool at Harrison Park. Each day, an SSA member would check the box and do the required maintenance.  Brown Trout eggs were used at this time. Interestingly, the water source was the same one we use today.

Eventually, we decided to build a hatchery on the Jim Weaver property using the spring-fed water of Weaver’s Creek.  After it was built, it was obvious that it was too small and a small extension was added using the rectangular gray tanks, still in use today.  Later we constructed the larger hatchery on the same site. Now the property is owned by the Ben Miller family where we have permission to operate.  At present, we have Chinook Salmon in the larger hatchery and year plus Rainbow Trout in the small hatchery. Dedicated volunteers do hatchery maintenance (cleaning tanks, picking dead fish, filling feeders, keeping records, etc.).  This maintenance is a 365 day a year job.

This background is necessary because it explains why we needed an Owen Sound Salmon Spectacular.  We needed a funding source for our hatchery programs. When the OSSS began in 1988, the committee had no idea whether anglers would come to Owen Sound and spend their dollars.  However, after the first year’s success, we knew they would. Over the 32 years, many improvements have been made. In 1988, we only had food available on the weekends, but hungry anglers were asking where the food was through the week.  That explained where the food booth came from and how it has evolved throughout history. As well, the beer tent has evolved from fish tanks full of bottled beer and ice to the draft facilities that are used today.

We knew that we needed a way to attract people to the “Fish Tent”, as it is called by the younger generation.  Now entertainment happens each afternoon and evening. In our opinion, the Salmon Spectacular has become Owen Sound’s largest social event and has developed into a Fishing Festival.

Each year, we publish an Outdoors Annual and invite you to obtain a copy to find out what is happening.  We also invite you to join us starting on the last Friday in August and ending on Labor Day Sunday in September. 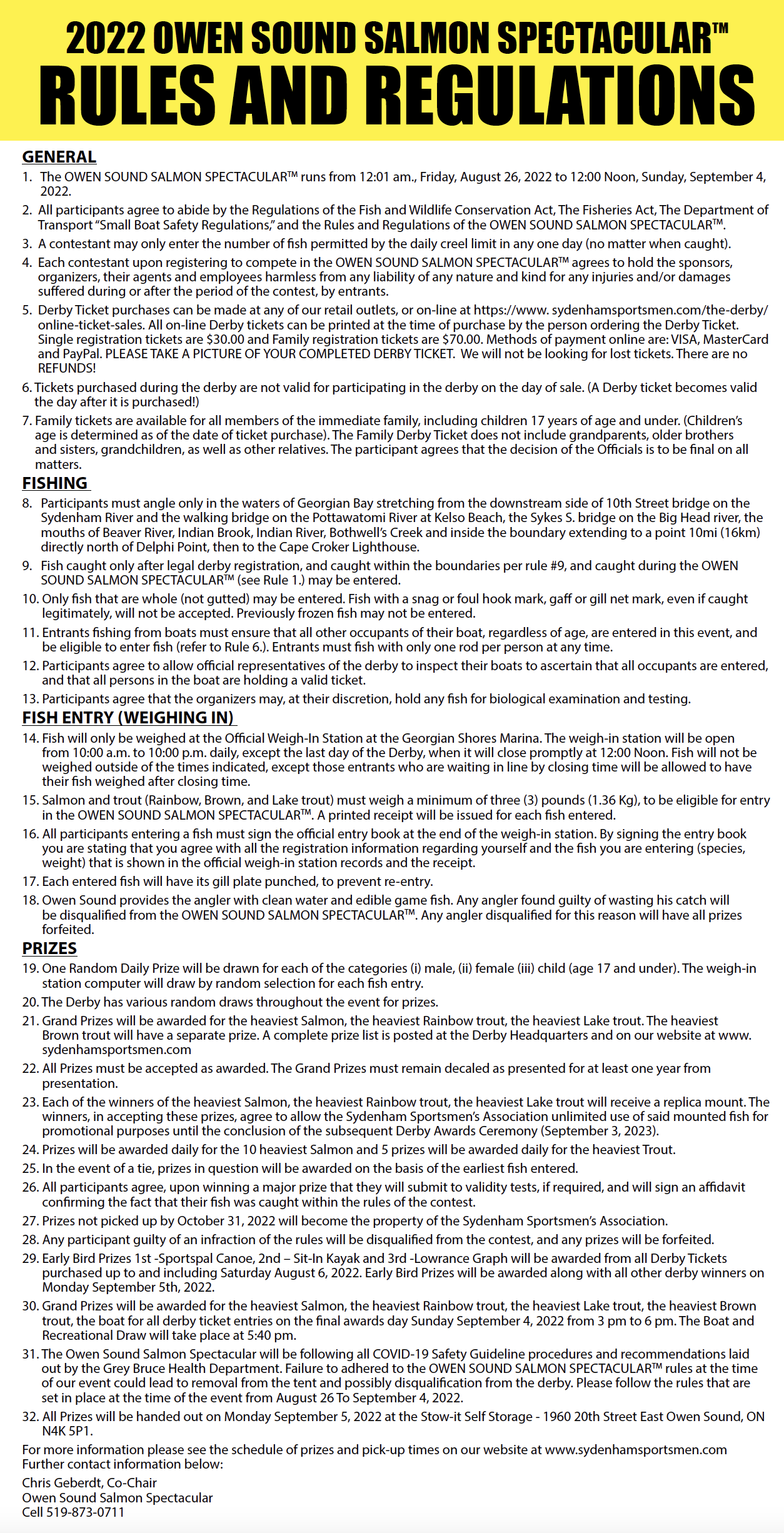